The Most Authentic Old West Town Remaining in the United States 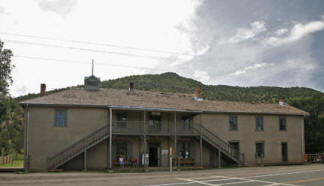 Lincoln’s idyllic and picturesque setting belies its violent past. The single road through Lincoln was once described by President Rutherford B. Hayes as "the most dangerous street in America.”
This National Historic Landmark is considered by many historians to be the most authentic old west town remaining in the United States. Center of the bloody Lincoln County War, the little hamlet was launched into the history books by a host of famous characters including Billy the Kid, Kit Carson, Pat Garrett, John Chisum and Lew Wallace.
Today, as you take a relaxing stroll in their footsteps, you can visit six museums operated by the Lincoln State Monument and see numerous other historic buildings much as they looked in 1880. Extensive exhibits document the history of the region, focusing on the Lincoln County War (depicted in the movie "Young Guns”, among many others). There are restaurants and gift shops to enjoy as well.
Directions and Information for Visitors 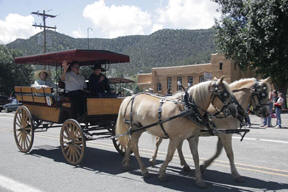 Located 12 miles east of Capitan on U.S. Highway 380 and just 35 miles northeast of Ruidoso, the State Monument museums are open seven days a week, except for Christmas, New Year, Easter and Thanksgiving days. (The Tunstall Store and Dr. Woods House are closed during winter months, November 1-April 1.)
The Old Lincoln Days and Pageant are held annually the first full weekend in August and other special events occur throughout the year. For more information call the Lincoln State Monument at 575-653-4372.
Admission to the museums is $5.00 per adult, with children 16 and under free with a paying adult. Free admission is offered to New Mexico residents on Sundays and to New Mexico seniors on Wednesdays.
Map